The archives described on this page represent just a few of the materials on Hip Hop’s history available for research in the Cornell Hip Hop Collection. If you’re looking for something specific, search Cornell University Library’s catalog for additional Hip Hop materials and archives. To make a research appointment, request a presentation for a class or group, or to offer materials for sale or donation, please contact us (rareref@cornell.edu).

Collected by author and curator Johan Kugelberg, the “Born in the Bronx” Collection established the Cornell Hip Hop Collection in 2007. It includes nearly 1,000 vinyl recordings documenting the earliest phase of commercial rap music ca. 1979-1984, along with nearly 400 Hip Hop party and event flyers from the New York City area ca. 1977-1985. A list of the recordings is available in the collection’s finding aid.

Cornell serves as the home of the archive of Joe Conzo, Jr. Called “The man who took Hip-Hop’s baby pictures” by the New York Times, Conzo captured images of the South Bronx between 1977 and 1984, including early Hip Hop jams, street scenes, and Latin music performers and events. The Hip Hop Collection preserves more than 10,000 of Conzo’s negatives and photographs, including extensive documentation of the important early Hip Hop group, the Cold Crush Brothers. More than 6,000 of Joe’s photographs can be searched in this digital collection.

This collection preserves the original working files and art of Buddy Esquire, “The Flyer King” of Hip Hop, through hundreds of his flyers, his original cut-and-paste flyer art, and portfolios containing the clippings, lettering, and source images he used to create many of his designs. His archive also includes original art work and rough text layouts for his flyer designs, hundreds of photographs, manuscripts and flyer design notes, two sketch books, two black books, Hip Hop flyers designed by him, Hip Hop flyers designed by others; and flyers and handbills related to Hip Hop, anime, and Bronx night life. Some of Buddy Esquire’s flyers can be viewed in the Cornell Hip Hop Flyer Collection.

More than 7,000 Hip Hop recordings ca. 1980-2005 on vinyl and CD (most concentrating on the 1988-2001 period) collected and donated by Geoffrey Weiss. His collection also includes many original press packets and photographs issued by record labels and artist representatives.

The Breakbeat Lenny Archive consists of sound recordings and printed material ca. 1979-1982. It was assembled by Lenny Roberts, better known as Breakbeat Lenny, a DJ who, along with Breakbeat Lou (Louis Flores), assembled the seminal compilation series “Ultimate Breaks and Beats” (1986-1991). The core of the collection is a series of rare soundboard recordings of live performances, 127 Hip Hop party flyers, and a selection of publications relating to record collecting and DJing, which informed the assembly of the breakbeats that guided the growth of Hip Hop throughout the 1980s and 1990s. Flyers in this collection were digitized as part of the Cornell Hip Hop Flyer Collection online.

Archive of the IGTimes (originally called the International Grafitti Times), #8067

This collection documents the international rise of the aerosol art movement and its origins in New York City's Hip Hop culture. Founded by David Schmidlapp, with art direction by Phase2, the complete files of the magazine (published 1983-1994) fill 16 cartons and include: 44 hand-collaged paste-upboards, 4,500 photographs documenting art work sent to the IGTimes from all over the world, 5,000 pieces of fan mail from readers, more than 500 magazines and fanzines, advertising files, and 1,000 slide transparencies.

149 original drawings and 370 original photographs, comprising nearly all that remains of the original sketches used for some of the most famous subway trains ever painted, the artist’s collection of original photographs of his work (yard and station shots in addition to action shots of paintings in progress), and the artist’s collection of original drawings by other United Artists crew members and collaborators such as Pjay, Mitch 77, Duster, Billy 167, Mad, RAL2 and Zoom. The collection also contains ephemera such as gallery flyers, newspaper articles, and the rare original Style Wars New York "sneak preview" poster with an original outline by Duster on the reverse.

Charlie Ahearn is an American film director and video artist. He is best known as the director and producer of Wild Style (1983), celebrated as the first feature film to document Hip Hop culture. Charlie Ahearn’s Hip Hop Archive features 10 cubic feet of material: original video and audio recordings, photographs, detailed film production records and drawings for Wild Style, flyers, posters, original art, and oral histories documenting early Hip Hop culture and the production of his 1983 film Wild Style. The contents of his collection is listed in this collection’s finding aid.

Ernie Paniccioli is a Cree photographer, author and activist who has been capturing Hip Hop culture on film for the past 35 years. His 2002 book Who Shot Ya: Three Decades of Hip Hop Photography is widely celebrated and along with Joe Conzo, he is considered to be among Hip Hop’s most important photographers. His archive includes more than 50,000 images in physical and digital form: photographic prints, negatives, digital files, magazines, and other ephemera created or collected by him, representing the complete body of his work as an artist and photographer from the 1970s to the present, including his work as a primary staff photographer for Word Up magazine. The contents of his collection is listed in this collection’s finding aid.

Jorge “Popmaster Fabel” Pabon is a Hip Hop dance pioneer and longtime member of the Rock Steady Crew. He established his archive in the Hip Hop Collection with a deposit of early flyers, promotional materials and other ephemera documenting his career as a celebrated b-boy from the early 1980s to the present. An adjunct professor of dance at the NYU’s Tisch School of the Arts, Fabel practices and teaches popping and locking, a style of Hip Hop dance. He is also a graffiti artist and a DJ. In 2012 he won the Words Beats Life, Inc. Hip Hop Pioneer of the Year award and was designated “Best Hip Hop Professor” by the Village Voice.

Kevin Powell’s archive documents his work as activist, lecturer, writer, and Democratic candidate for Congress in Brooklyn, New York in 2008 and 2010. His collection is comprised of five boxes of business records, magazines, and associated research materials offering insight into his activities and achievements, from his participation as a cast member in the first season of MTV’s reality series "The Real World, New York" (1992), his curatorial work on the first Hip Hop exhibition at the Rock and Roll Hall of Fame (1999), and audio files of his interviews with more than 23 artists and performers conducted while working as a senior writer for Vibe magazine, ca. 1992 - 1996 including Dave Chappelle, Snoop Dogg, Chris Rock, Mike Tyson, Ice-T, and Tupac Shakur. 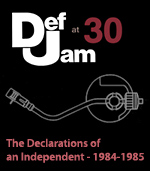 Bill Adler was the first VP of Publicity for Def Jam Recordings, 1984-1990. His Hip Hop archive includes letters, manuscripts, photographs, magazine and newspaper articles, books, sound and video recordings, and other ephemera documenting the history of Hip Hop. At the core of his archive are files on more than 1400 Hip Hop artists and groups from the 1970s to the present. The files include press clippings, promotional headshots, record label and artist press releases and bios, promotional flyers and other ephemera. The Adler Hip Hop Archive is in the process of being digitized. New items are continually added to the digital collection.

Known as the “godfather” of Hip Hop, Bambaataa gave Hip Hop its name and was the first to define its core artistic elements—MCing (rapping), DJing, b-boying/b-girling (breaking), and graffiti art—under one cultural umbrella. His archive, comprised of more than 500 boxes of material, includes approximately 30,000 sound recordings representing his music collection from the 1970s onward, manuscripts, notebooks and writings spanning from his school days through the early 2000s, early Hip Hop flyers, photograph albums, books and pamphlets, business records and personal papers, along with records documenting the Universal Zulu Nation. Unique audio and video recordings preserve his live DJ sets, lectures, personal appearances, interviews, and Universal Zulu Nation anniversaries and events. This collection was processed and described with support from the National Endowment for the Humanities. Numbered Vinyl Records of Afrika Bambaataa have been digitized.

Richard “Crazy Legs” Colon is a pioneering b-boy (break dancer) and the president of the Rock Steady Crew, one of the most active and influential crews in breakdancing history. His first film appearance was as himself in Charlie Ahearn’s independent feature film Wild Style (1982), followed by a featured appearance in the early Hip Hop documentary Style Wars (PBS, 1983). He also appeared as a body double for Jennifer Beals’ final dance scenes in the movie Flashdance (Paramount, 1983) and as himself in the fictional film Beat Street (Orion, 1984). Today he remains involved in community outreach, activism, dance instruction and dance theater productions. His archive contains newspaper and magazine clippings, artwork, Hip Hop flyers, photographs, and materials documenting the activities of Rock Steady Crew, books, catalogs, posters, awards, and other ephemera. The collection also includes video documentation of dance and related hip-hop events.

Curtis "Grandmaster Caz" Fisher (aka Casanova Fly), was a member of the early Bronx Hip Hop group The Cold Crush Brothers. He is widely regarded as one of Hip Hop's greatest emcees (rappers). He is currently active as a celebrated NYC Hip Hop landmark tour guide, DJ, and worldwide ambassador of Hip Hop culture. His archive contains notebooks, photographs, documents, audio and video recordings, clothing and other artifacts by or relating to his career as a MC, songwriter, and DJ and his activities as an early innovator and participant in Hip Hop culture. More than a dozen notebooks and binders contain his handwritten lyrics and rhymes; cassette tapes contain recordings of his live performances with the Cold Crush Brothers, as well as his appearances on radio shows and other programs; photograph albums document his performances and activities with friends & family; Also included are vinyl records, video tapes; denim jacket with painting by TATS CRU, sneakers, hats, and a action figure of his likeness.

Brian Lassiter was active in Atlanta’s Hip Hop and rap music scene. His career has spanned across jobs as an audio engineer, camera operator and journalist, and as a business owner focused on artist management and promotion, music production, marketing, sales and distribution. His archive includes nearly 2,000 issues of national and regional Hip Hop and urban music magazines which chronicle the rise and spread of Hip Hop culture and its specific look and sound as it emerged in different regions of the country, particularly in the South. The collection is especially strong in the 1980s, 1990s, and the early 2000s. The archive also includes books, photographs, flyers, posters, label and artist promotional press packets, business records, and music sales and distribution catalogs. The archive provides insight into urban arts, music, entertainment, and the black alternative press during the last quarter of the 20th century and the early years of the 21st.